Ogoniland – a Story of Environmental Contamination

Ogoniland is an approximately 1000 square km territory in Rivers State, Southern Nigeria, on the coast of the Gulf of Guinea, east of Port Harcourt. It is on the Niger Delta, and contains the 3rd largest Mangrove ecosystem in the world. Nigeria is home to 182 Million people, population of the Niger Delta is 30 million, and Ogoniland approximately 850000. Ogoni are predominantly farmers and fishermen who have inhabited the area for over 500 years. 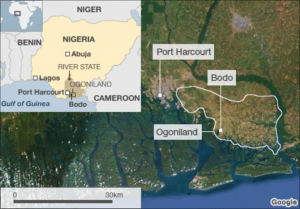 The ecosystems in this area offer some of the highest levels of biodiversity on planet Earth. It supports a huge variety of plant and animal life, and a tremendous number of species of freshwater and brackish water  fish. As with most delta systems, the area was rich in fertile soil. However, Ogoniland also sits on top of one of the richest oil reserves on the planet.

Impact of Contamination on the Ogoni People

Hydrocarbon contamination of mangrove swamps leads to the loss of leaves and stems and eventually the roots become coated in a bitumen-like substance, stopping growth and killing the plant. Mangroves are essential spawning grounds for many species of fish, which have disappeared from these devastated areas and in some cases invasive and destructive species are taking over. This means fishermen must travel further and into more dangerous waters just to find enough fish to sustain them and their families. Often fishing boats and equipment are covered in an obvious layer of hydrocarbon, and the water they are fishing in is covered by a visible sheen. Fish farms fail due to the same pollution.

The Niger Delta, like all delta formations has rich fertile soil capable of sustaining a large variety of crops. Contaminated soil leads to weak and unproductive plants, their yeild often becoming unusable/inedible. Land fires are also common in contaminated areas, increasing the devastation. It becomes more and more difficult for farmers to sustain themselves, let alone make a living.

Contaminated drinking water exposes people to carcinogens and harmful chemicals at levels many times over those considered safe by the WHO. Possible health consequences are too vast to enumerate and significantly impact on the quality of life of the Ogoni people.

From 2009-2011 UNEP (United Nations Environmental Programme) undertook an environmental assessment of Ogoniland. Over 4000 soil, air and water samples were analyzed, 142 groundwater monitoring wells and 780 boreholes drilled, and over 5000 medical records were examined.

UNEP found that the area was heavily polluted; contamination of drinking water in many communities, and a layer of oil floating on groundwater ranging from a sheen to a thick layer of black oil coating plants and shorelines. The study looked for BTEX (benzene, toluene, ethylbenzene and xylene), PAH (Polycyclic Aromatic Hydrocarbons) and VOC (Volatile Organic Compounds). In at least one case a community’s drinking water was contaminated with benzene, a known carcinogen, at levels 900 times above World Health Organization guidelines. In another severe case 8cm of refined oil was floating on the groundwater that served several wells used for drinking water. Hydrocarbons were found as deep as 5 inches into the soil and in highly traveled areas this has lead to a hard hydrocarbon crust on the soil surface. The majority of the contamination is the result of crude oil, although some sites also have contamination by refined products.